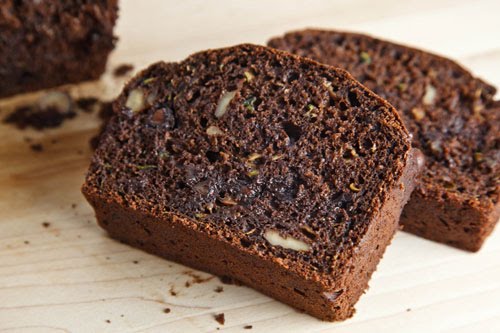 The farmers market has been overflowing with zucchini lately. They have so much that they are quite literally giving it away! This weekend when I picked up some zucchini at the farmers market they threw in a few extra as I paid. The question was: What was I going to do with all of this unexpected extra zucchini? The first thing that came to mind was a zucchini bread which is always a nice and easy way to use some zucchini. This time however I wanted to try a chocolate version of the zucchini bread. I pretty much just took my standard zucchini bread recipe and added cocoa powder. I kept the walnuts in the bread and added some chocolate chips for even more chocolaty goodness. The chocolate zucchini bread was as easy to make as mixing the ingredients and baking and it turned out wonderfully. I could not resist slicing the bread and trying a piece before it had cooled down from the oven. The chocolate chips were still melted from baking and the bread was nice and light and moist and good! One of the things that I like most about making quick breads like this is that now I will have quick and easy breakfasts for the rest of the week.