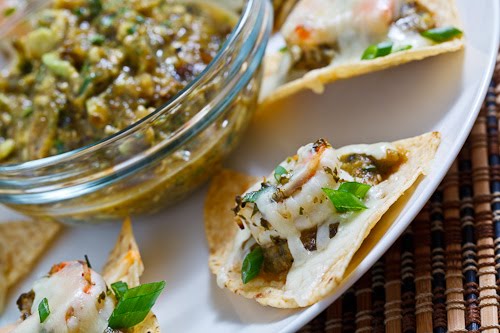 Shrimp has been on my mind a lot recently and I had to include them in my Super Bowl Sunday snack lineup in one form or another. After contemplating it for a while I decided to go with shrimp nachos. The basic idea behind nachos is to pile tortilla chips on a plate, top them with things like meat, salsa, jalapenos, olives and cheese and then bake them until the cheese melts. I wanted to use whole shrimp to maximize the experience of their juicy and succulent nature and I did not want to chop them up. I was thinking that the full shrimp would not be clinging to the nachos all that well when randomly sprinkled on so I decided to go for individual serving nachos with one shrimp per tortillas chip. I was seeing these shrimp nachos as green so I wanted a salsa verde and I also had to include some avocado so I took the opportunity to combine the two and I made some avocado and roasted tomatillo salsa . Next up was some cilantro lime shrimp which were sprinkled with green onions, melted cheese and cilantro. These shrimp nachos were amazingly tasty and did they ever disappear quickly! I served them with the remaining avocado and roasted tomatillo salsa for dipping. 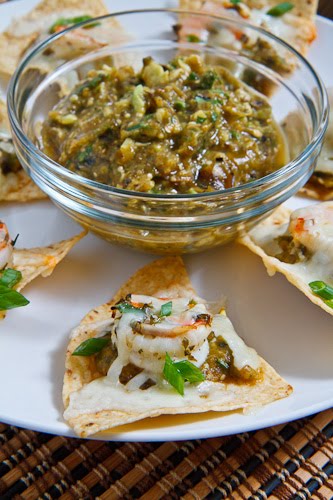 These cilantro and lime shrimp are so easy and yet so tasty! The cilantro and lime combination is a good one and it works really well on shrimp. You can snack on these shrimp all by themselves or use them in things like shrimp tacos , shrimp quesadillas or shrimp nachos. In the summer they are great on the grill but there is no need to wait for summer as they also cook up really well on an indoor grill or even in a pan. 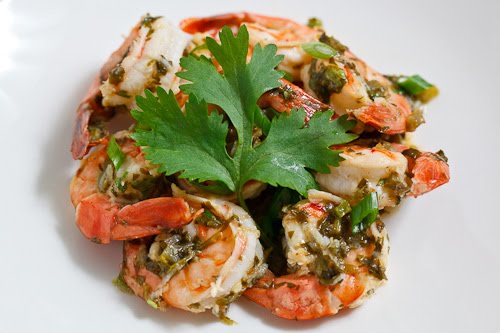