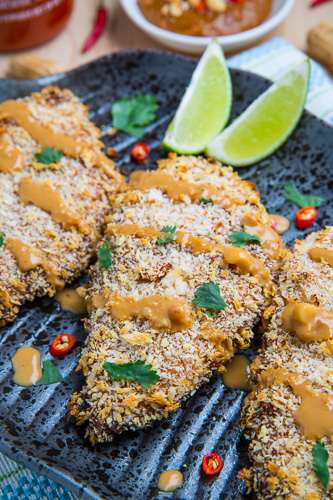 Chicken coated in a spicy peanut sauce and covered in panko breadcrumbs that is baked until golden brown and crispy.

Recently I have been changing some typically deep fried dishes into healthier versions by coating them in panko breadcrumbs and baking them until golden brown and crispy. Normally I get the panko breadcrumbs to stick to the food by first dipping it is egg or an egg based batter but a when a reader asked about egg-less alternatives, it got me to thinking. When I made the Pad Thai shrimp burgers on the weekend the peanut sauce on them led me to the though of coating chicken in a Thai style peanut sauce follwed by the breadcrumbs and then baking them, which sounded so amazingly good! I am completely addicted to peanut sauce so I hardly needed an excuse to make a healthy baked crispy chicken dish with it!
The recipe for this crispy baked peanut chicken is really easy, you pretty much just thin the peanut sauce down until coats the chicken with just enough to get the panko breadcrumbs to stick and then bake until crispy and golden brown! All I have to say about this peanut chicken is that you have to try it! The peanut sauce works amazingly well at holding the breadcrumbs onto the chicken and the breadcrumbs bake up nice and crispy! Of course that does not even come close to being as good as all of the flavour that the peanut sauce adds to the mix! 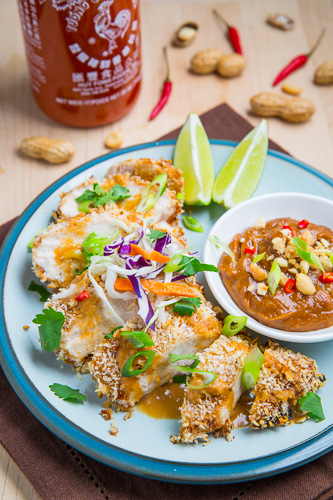 This spicy peanut coated crispy baked chicken is easily tasty enough to devour all by itself, or with a drizzle of even more peanut sauce, but you should probably at least try to include some other things in the meal by serving it on pasta, rice, quinoa etc. along with some vegetables or even in a sandwich. 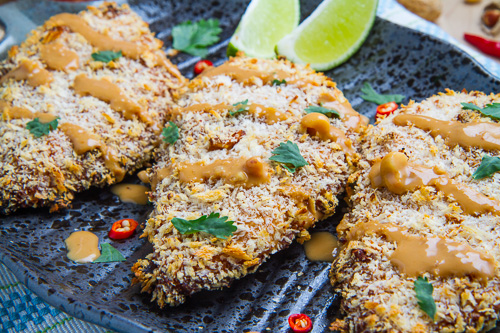 I like to serve this crispy baked peanut chicken in a simple salad with lettuce, cucumber and avocado with a peanut dressing that is made by adding lime juice and more water or coconut milk to the peanut sauce to thin it out to dressing consistency. 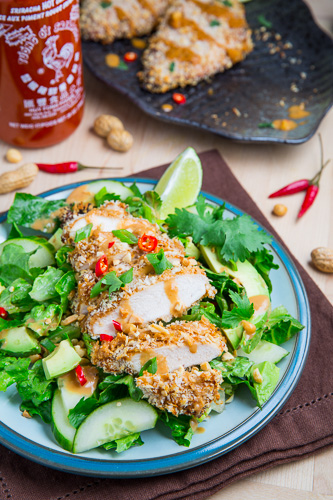 Chicken coated in a spicy peanut sauce and covered in panko breadcrumbs that is baked until golden brown and crispy.