A smooth and creamy chickpea dip or spread that is nice and light, healthy and addictively good! Who knew that authentic hummus was so easy to make at home? 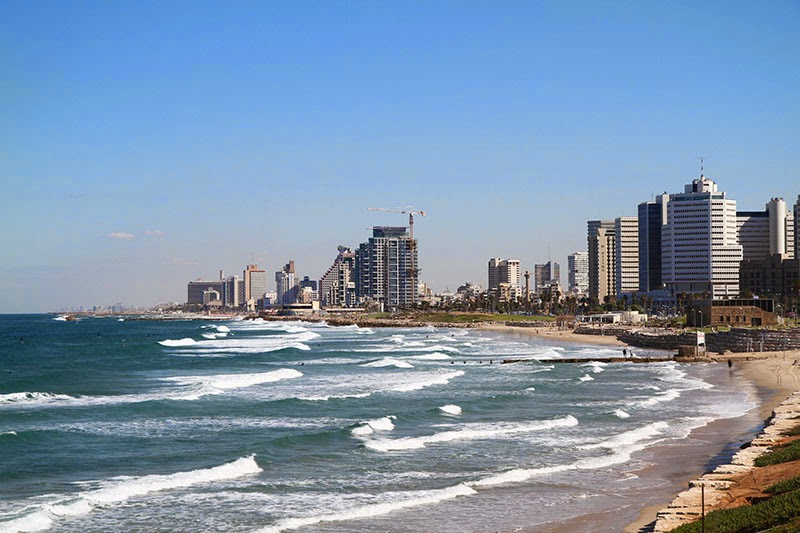 With the arrival of the holidays I got distracted from sharing my adventures on the Taste of Israel tour (see part 1: Kanafeh/Künefe)! After an evening out on the town Tel Aviv there was an early morning tour of the old port in Yaffo, along with sampling some of Yaffo’s tasty treats. One of the first things that we stopped for was a delightful hummus at a hummus bar!

Now if you thought that hummus was just a dip that you bought at the grocery store or made at home with canned chickpeas every once in a while, it could not be further from the truth! In fact there is quite a large hummus ‘culture’ out there with secret recipes, shops dedicated to making hummus and only hummus, that have been been in business for generations, and even great debates on who makes the best hummus, over dinner, which is just hummus and pitas for dipping. Our first food stop was at Abu Hassan which is apparently one of the fore runners for making the best hummus in Israel. I have to admit that the hummus that I had at Abu Hassan’s was the best hummus that I had ever had and that of course meant that I would have to work on my hummus recipe when I returned home! 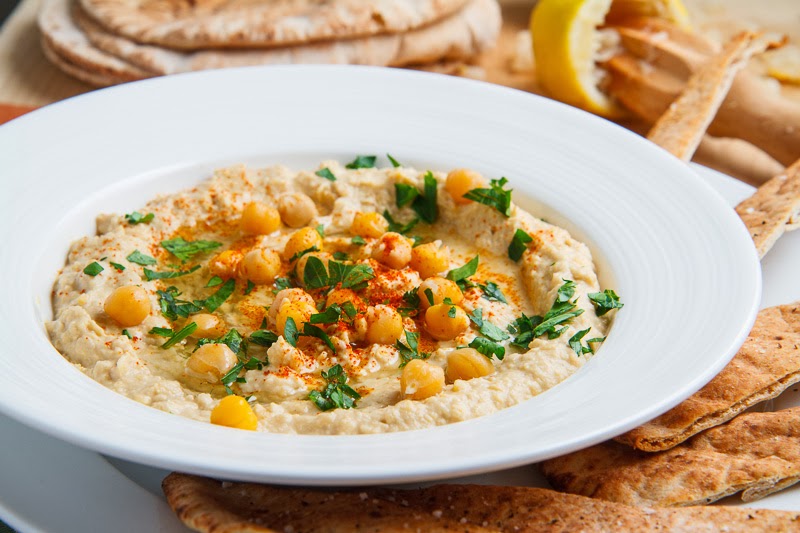 After talking to several people in Israel and doing some research online I found that even though the recipe for hummus is a simple mixture of chickpeas, tahini (sesame paste), garlic, lemon juice and salt, there are about a million different ways of making it! The first main difference that I came across was whether to use dried or canned chickpeas and since I had only ever used canned chickpeas I was eager to see what the difference was. As it turns out it’s actually pretty easy to cook chickpeas, you just need to soak them in water overnight and then cook them for 2 hours on the stove or just throw them into a slow cooker for the day so as long as you remember to start the night before, it only take a few minutes of extra active time to use dried chickpeas. Just comparing dried chickpeas vs canned, the dried ones somehow taste lighter and cleaner than the canned ones so I was very interested to see the difference it would make in hummus.
The next main difference that I came across was whether to peel the chickpeas or not. Yes, you can peel chickpeas! They have a thin skin that can be removed and the idea is that the skin does not taste as good as the flesh within and it’s removal allows for a smoother hummus. I had not realized that you could peel chickpeas so I had to try it and it is actually pretty easy, I was able to get through an entire can in less than 5 minutes and it’s even faster once you get both hands going at it at the same time.
The first test that I set up was a rather large one with me making 4 batches of hummus comparing dried vs canned and peeled vs unpeeled. The results were that the cooked chickpea hummus was lighter, cleaner and creamier than the canned chickpea hummus which was coarser and required more liquid to puree. The differences between the peeled vs unpeeled were that the peeled was smoother with a lighter and brighter flavour and the unpeeled was coarser with a heavier, nuttier flavour. All in all I liked the cooked and peeled version the best and I will make that version when I can but the canned and unpeeled version was still very good and leagues better than any store bought, so called, hummus (more on that later).
The next test that I tried was with respect to oil. I found that a lot of ‘western’ recipes for hummus call for large amounts of oil whereas many Mediterranean recipes do not include any oil in the hummus but rather just serve the hummus topped with oil. In this test I made 3 batches of hummus, one with no oil, one with a small amount of oil and one with even more oil. I found that the recipe with a small amount of oil was slightly creamier that the one with no oil but adding more oil really did not have much affect. My conclusion to this test was that you could add 1 tablespoon of oil if you desired but it only makes a small difference from using no oil. (All tested were done with extra oil drizzled on top.) 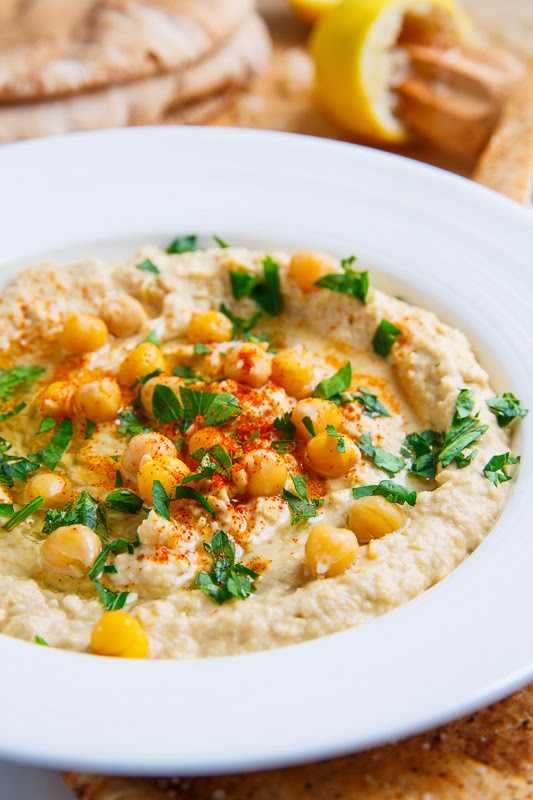 Wow, with all of that testing, I was eating hummus for months! Hummus actually does make for a really tasty, light, healthy and satisfying meal especially when served with whole wheat pitas along with a simple side salad of cucumbers and tomatoes.
Although I made 7+ batches of hummus over 2 months I have only just started to scratch the surface of all of the different ways to make the best hummus and so I will have to continue with more tests! I felt that my tests with hummus would not be ‘complete’ without one more test, store bought hummus… When I was in the grocery store one day a top brand named hummus was on sale for only $5 for about a half a pound (argh! That’s like an 10X markup on homemade!) so I picked some up. I looked at the ingredients on the side and found all of the expected ingredients and one additional that I was not familiar with and cannot pronounce so I am going to assume that it is a preservative. In all honesty, I could not finish the thing, after just two tablespoons it tasted, well, just wrong, I could not quite place my finger on it and it left a bad aftertaste. I am not one to waste food but it was no accident that this tub of store bought hummus somehow got lost in the back of my fridge until one day I did find it and I had to throw it out without opening it for fear that what I could see growing in it might jump out and eat me. I will definitely be sticking with homemade hummus; it’s so easy to make an so much cheaper!
Hummus definitely makes for a great snack for watching the game so if you are looking for a lighter, healthier and tasty snack for the football playoffs this weekend, some homemade hummus would be perfect! 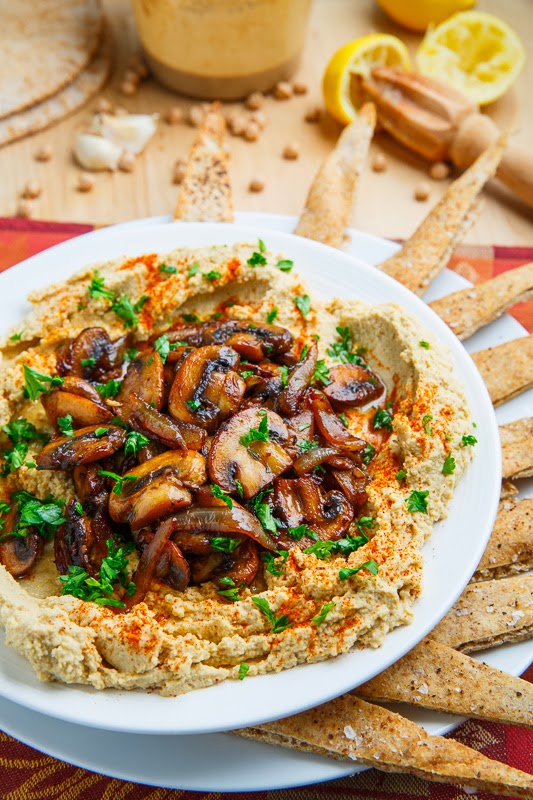 Top your hummus with something tasty, like sauteed mushrooms! 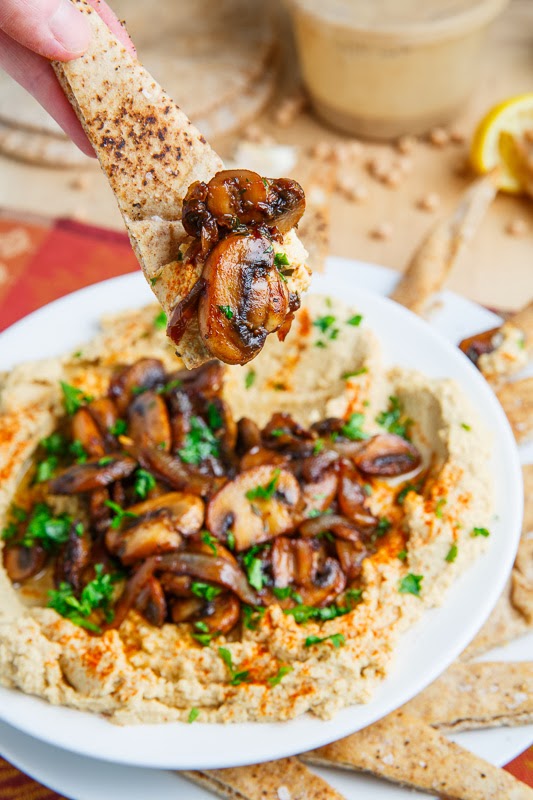 A smooth and creamy chickpea dip or spread that is nice and light, healthy and addictively good! Who knew that authentic hummus was so easy to make at home?

Option: Remove the skins from the chickpeas by pinching it off for a smoother hummus.
Option: Add 1 tablespoon olive oil off for a smoother hummus.
Option: Serve topped with chickpeas, olive oil, chopped parsley, paprika and cumin to taste.
Tip: Look for tahini with a lighter colour that has a sweet after taste as tahini darkens with age and becomes bitter and you don’t want that in your hummus.
Tip: Try to get dried chickpeas that are not too old as old chickpeas may not ever soften just like other dried other beans.
Nutrition Facts: Calories 181, Fat 9g (Saturated 1g, Trans 0), Cholesterol 0, Sodium 101mg, Carbs 19g (Fiber 5g, Sugars 2g), Protein 7g
Nutrition by:

An addictively good homemade creamy chickpea dip or spread that is ready in 5 minutes!

Easy and irresistible sauteed mushrooms that are great with pretty much everything.