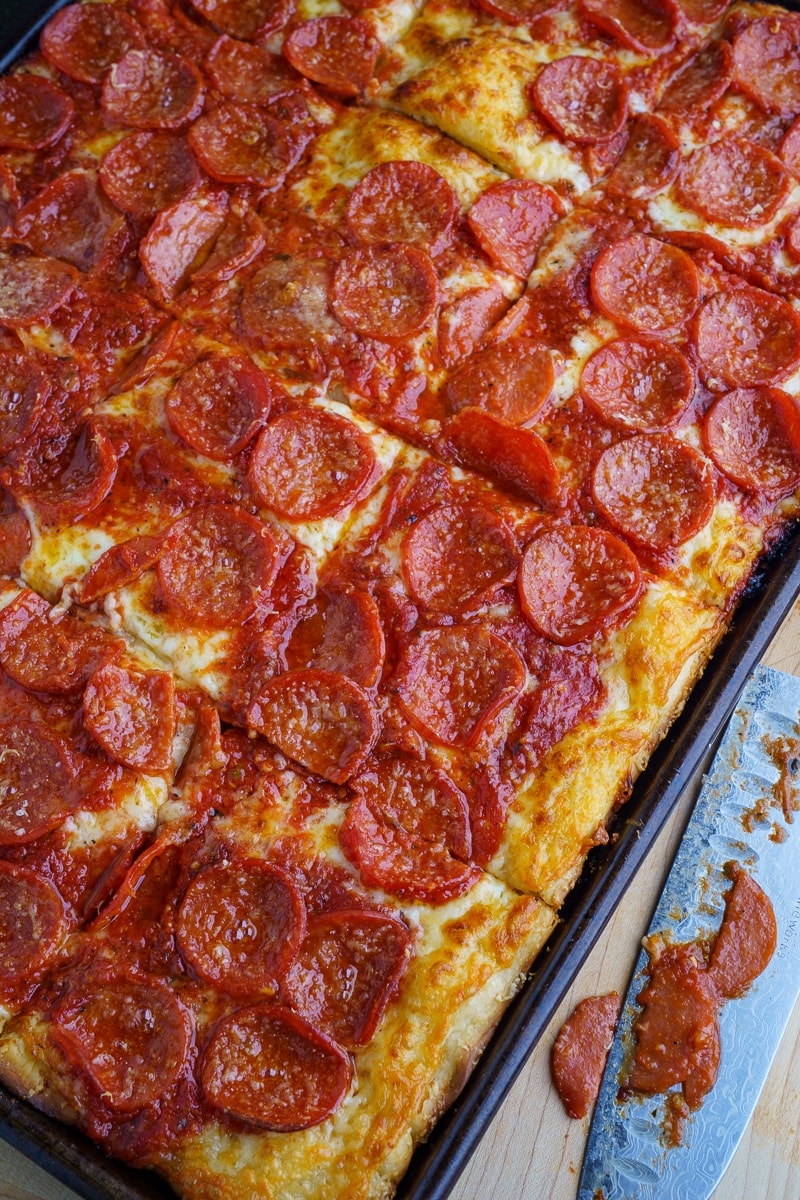 Sicilian style pizza with a thick focaccia crust that is nice and crispy on the bottom and soft in the middle all topped off with plenty of cheese, a tasty tomato sauce, and pepperoni!

I am a huge fan of pizza and although I often go with a regular style pizza with the classic pizza dough I also enjoy the Sicilian style pizza! Sicilian pizza is a pizza that originated in Sicily, Italy, where it has a thicker, focaccia, style crust with topping and in North American it is typically rectangular in shape. This pizza in baked in a rectangular pan (aka a sicilian pizza pan) and the pan is covered with plenty of olive oil so that the bottom of the crust soaks up that oil, and bakes until it is nice and lightly golden brown and crispy while the center stays nice and moist and chewy! Deli sliced mozzarella is often used rather than the more typical shredded cheese and it’s placed directly on the dough and this helps to prevent the pizza sauce from being in direct contact with the dough which might result in a soggy crust. I like to go with a simple and tasty pizza sauce and pepperoni along with a sprinkling of parmesan (or pecorino) for toppings but any of your favourite pizza toppings will work. 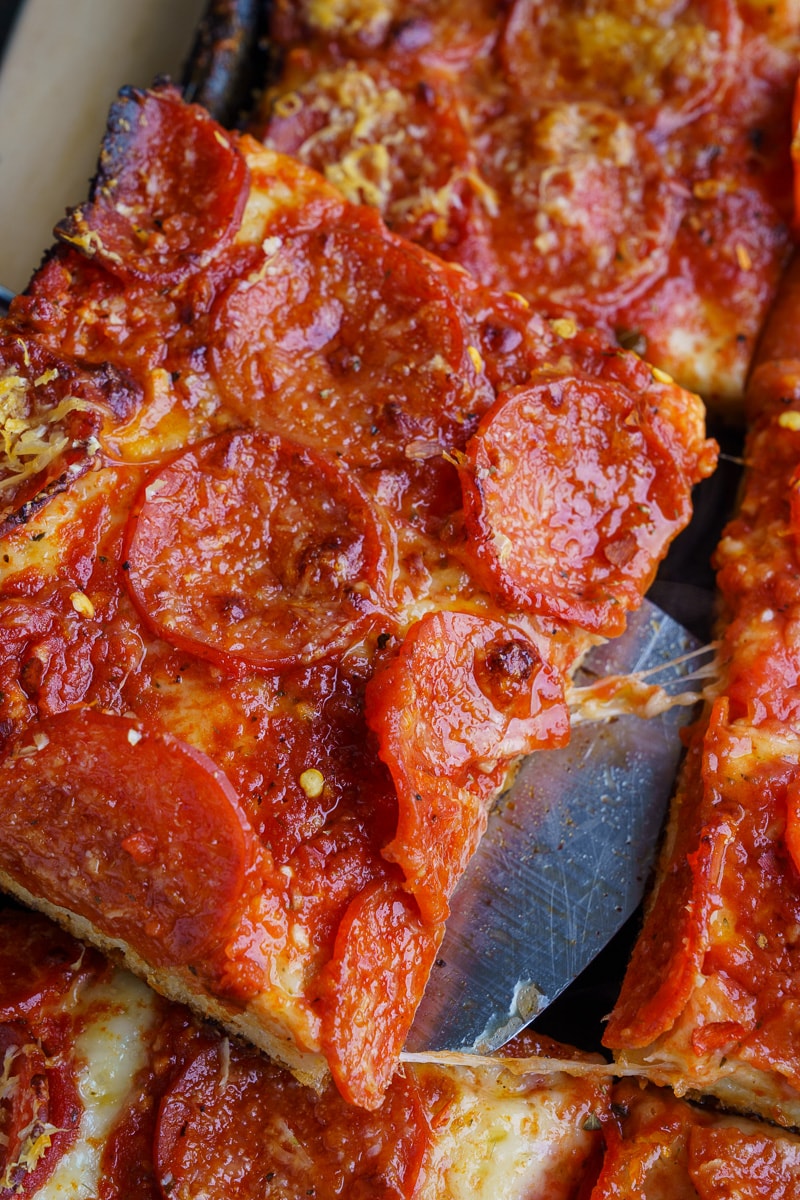 The sicilian pizza dough is a thicker focaccia like dogh that gets nice and golden brown and crispy on the bottom when it bakes! 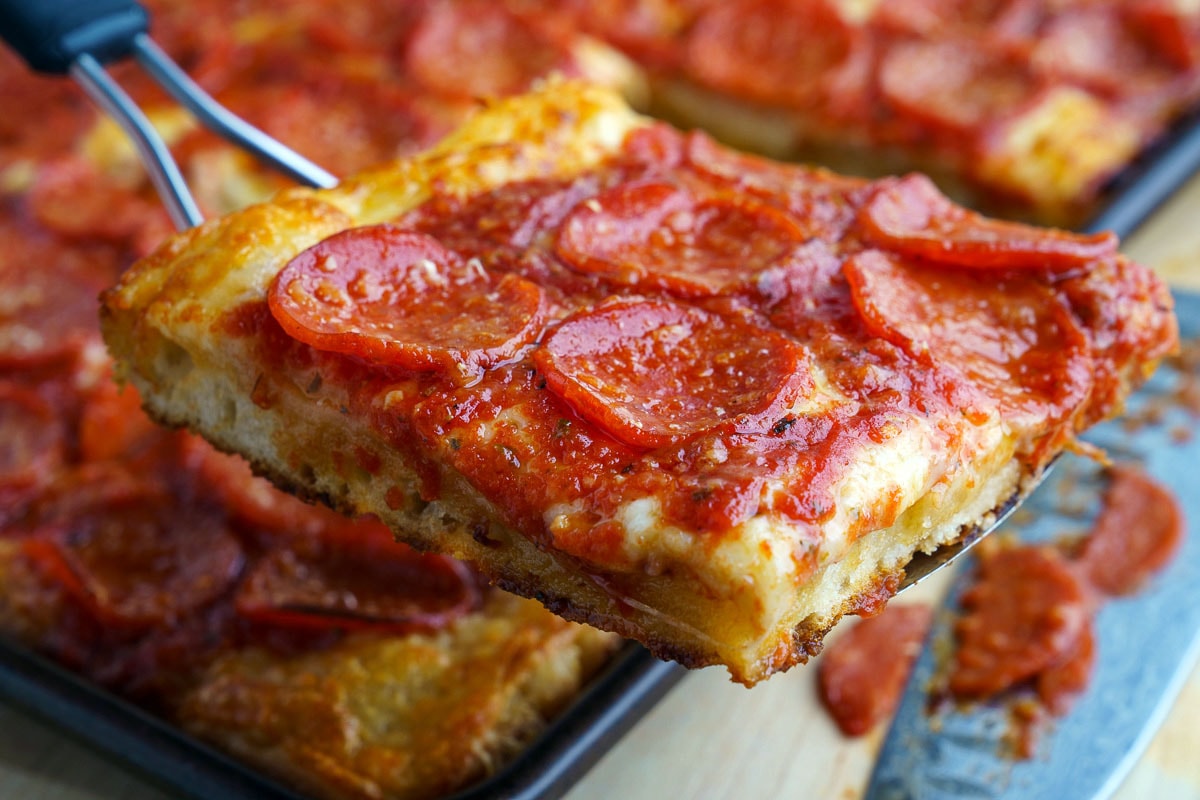 Just look at that yummy thick and chewy crust! Yum! 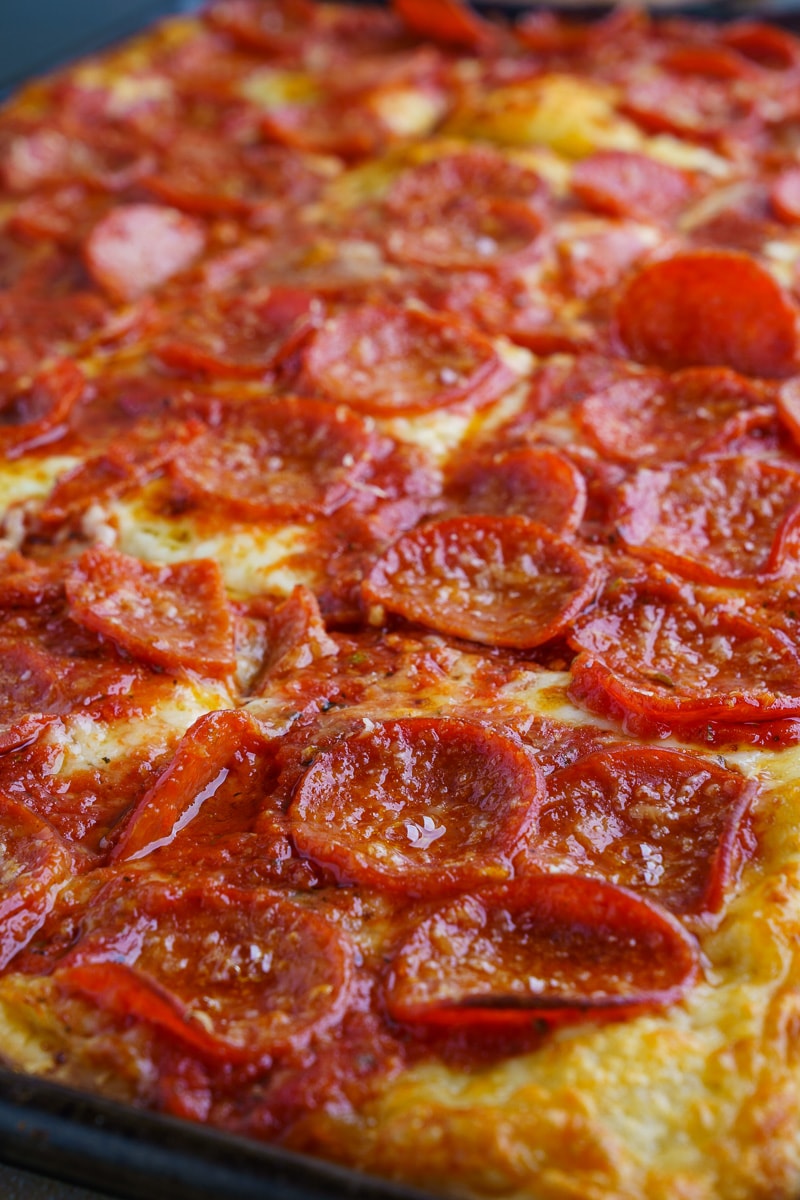 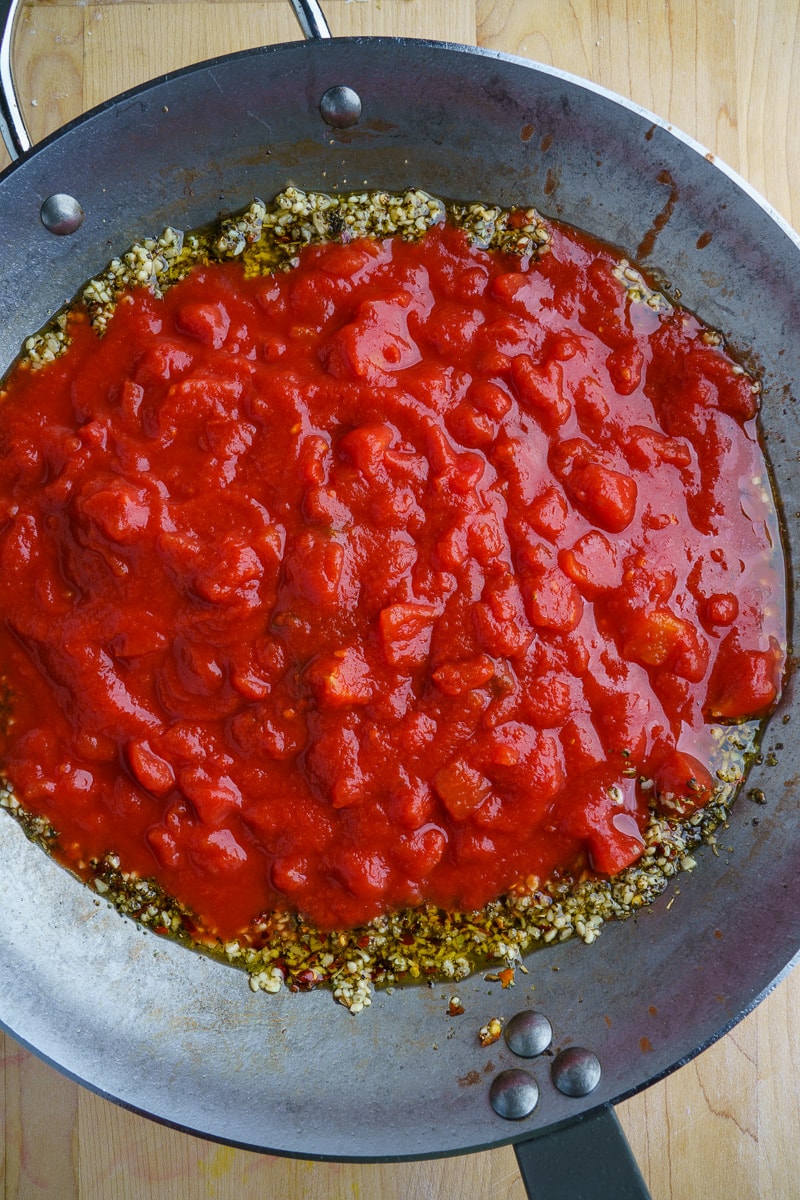 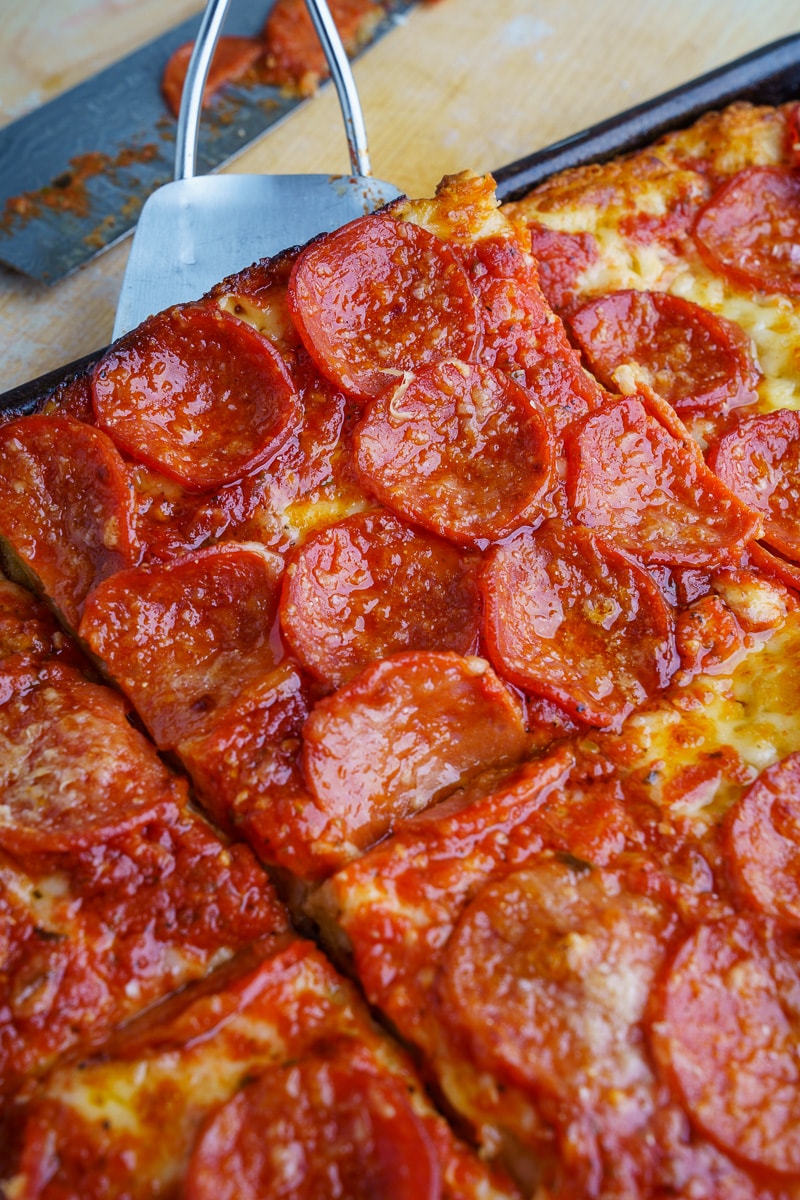 Sicilian style pizza with a thick focaccia crust that is nice and crispy on the bottom and soft in the middle all topped off with plenty of cheese, a tasty tomato sauce, and pepperoni!

Option: You can use all-purpose flour instead of bread flour.
Note: The dough will rise better in slightly warmer than room temperature so a well air conditioned room is not the best. If your place is cool, you can warm your oven at 200F for 5 minutes and let it sit in the now slightly warm oven (after turning it off).
Option: Top the pizza with your favourite pizza toppings!
Nutrition Facts: Calories 225, Fat 11.6g (Saturated 3.2g, Trans 0), Cholesterol 17mg, Sodium 674mg, Carbs 22.8g (Fiber 1g, Sugars 1g), Protein 8g
Nutrition by: