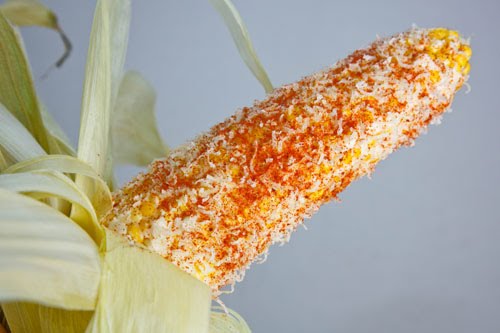 The fresh locally grown corn has been in the farmers market for the last few weeks and I have certainly been enjoying it. I have mostly just been eating off the cob with a little melted butter and some salt but I was looking for something new and I remembered seeing and interesting recipe for a Mexican corn on the cob or elote (aka elotes locos or crazy corn) that I had wanted to try. The Mexican corn on the cob is covered with melting butter, mayonnaise, cotija cheese and cayenne pepper. I had never thought about using mayo on corn but mayo is easily one of my favorite condiments and I was interested in trying it out. Though I decided to roast my corn in the oven, you could easily cook it up on the grill until it is just slightly charred and good. I was pleasantly surprised by just how good the Mexican corn on the cob was! Of course butter and corn go hand in hand and the tangy mayo also went really well with the sweet corn. The salty cheese rounded things out and perhaps my favorite part was the spicy heat of the cayenne pepper which I loaded on. What a great way to enjoy corn! Part way through the week I got tired of picking corn from between my teeth so I tried just cutting the cook corn from the cob and mixing up all of the ingredients in a bowl and the combo was also great in that form.

Mexican Corn on the Cob (Elote)