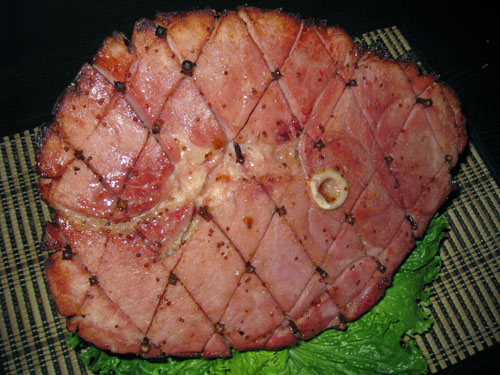 It has been a while since I have had a ham dinner and I have never made one myself so I decided to make one for Christmas dinner. It took me a while to choose between doing a honey glazed ham and a maple glazed ham. Since I have been doing so much with the maple syrup lately I though I would give it a rest and went with the honey. I picked up a bone in, smoked ham that looked good. Cooking the ham was pretty easy and it tasted really good. It was nice and moist an flavourful, though the clove was really subtle. I think I may include a bit of ground cloves in the glaze the next time to increase the clove flavour a bit. The best thing was that there was a of ham left over. I will get to enjoy ham dinners for a few nights. I tossed the bone in the freezer and if I recall correctly, one can use a ham bone is split pea soup. Now I will have to look for some recipes to use up some of the ham.