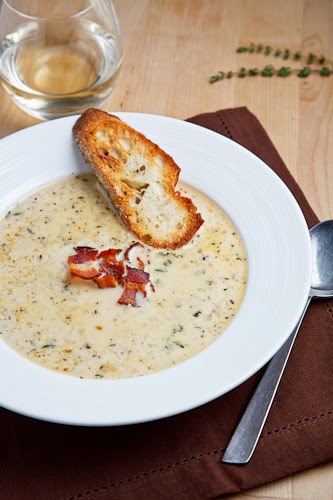 A creamy white cheddar cauliflower soup with a hint of thyme.

Although the winter has been pretty mild so far I have still been enjoying some hearty soups with the most recent one being this roasted cauliflower and aged white cheddar soup. It never ceases to amaze me how simple vegetable soups like this one can be so good with so few ingredients and that might be why I keep coming back to them. The main vegetable in this soup is of course the cauliflower and it is roasted before being added to the soup to concentrate its flavour and to get a bit of caramelization going. Up next is the basics with the onions and garlic followed by the herb of choice, thyme and finally the cheese. For the cheese I went with a white cheddar and one trick to keep in mind when adding cheese to soup like this is that if you use a stronger flavoured cheese like an aged cheddar then you will not need to use as much of it to get the same flavour. This soup can be amazingly creamy if you use heavy cream for some of the liquid but you can keep it on the lighter side by using milk. 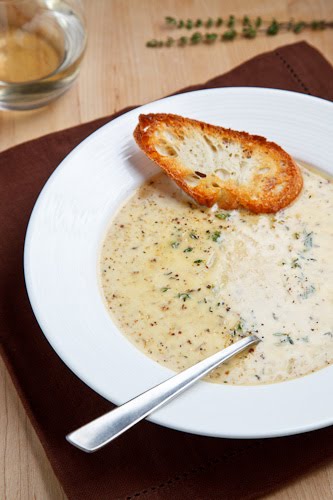 If you are not worried about trying to keep things on the lighter side then cook some double smoked bacon for garnish and use the grease to saute the onions and garlic. This will add even more flavour and a really nice smokiness.

A creamy white cheddar cauliflower soup with a hint of thyme.

Slow Cooker: Implement step 1, optionally implement steps 2 & 3, place everything except the cheese and milk in the slow cooker and cook on low for 6-10 hours or high for 2-4 hours before adding the cheese and milk and cooking until the cheese has melted.
Note: The amount of broth that you are going to need will depend on how large your head of cauliflower is and how thick or thin you prefer the soup to be.
Nutrition Facts: Calories 214, Fat 11.2g (Saturated 3.5g, Trans 0), Cholesterol 14mg, Sodium 372mg, Carbs 13.1g (Fiber 3.2g, Sugars 6.6g), Protein 16.2g
Nutrition by: